Sachiko, preparing to convince someone that she's invaluable to him. As seen by kid-blue, or justblue of the Lemmasoft Forums.

Ain't she sweet?
Posted by Taleweaver at 4:27 PM No comments:

Because if you do, there's now a guide to Adrift available. It's a good read and very much in the tradition of Infocom's InvisiClues from days gone by.

Also, I've already received a few bug reports, the largest being that after the Harem ending, the game continues. This will be sorted out in Adrift 1.1, though when Adrift 1.1 actually hits the net is less than certain. I currently have only little time as I'm writing something big.

On a related note, Adrift is now also available via download.com.
Posted by Taleweaver at 10:51 AM No comments:

First of all, let me brief you on the quick and dirty:

- over 100,000 words of text
- over 15 unique endings
- single playthrough approximately 2 hours; full gane should be at least 8 hours of reading time
- unique "adventure-style" first act, much more focused on exploration than most visual novels
- original theme song and voiced introduction
- all-original art
- engaging "hard sci-fi" plot with a mystery behind it that will keep you on your toes

Visually, Adrift is my finest game so far, the reason being two great artists whose help I was lucky to enlist. The main artist calls herself Luna Hoshi, also known as Mangaka Luna from the Lemmasoft Forums. She both designed and drew all of the character art, all of the backgrounds, the title screen and a significant part of the game's CGs. A few examples of her art: 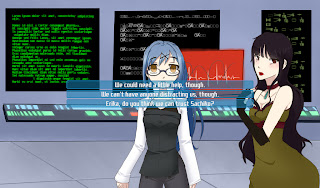 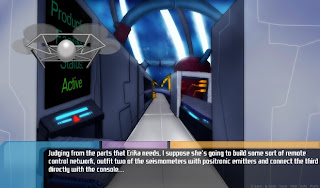 The little helicopter robot in above picture is an example of what my other artist, G_D_I_, created for me: the usually underrated "additional art". Really, without "additional art", most games would be nothing; without those little contributions, a lot of the mood just wouldn't be there, and the GUI would be crap instead of this: 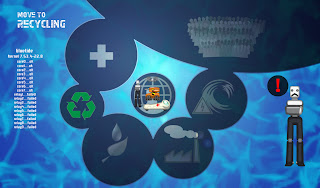 This is the interface for the first third of the game: it shows a graphical overview of the city of Bluetide, the location of four robots you can control (currently, all of them are in the central section) and which robot you currently control (the humanoid guy on the right side of the screen). Pick a 'bot, pick a location, robot moves there, do stuff there. Essentially, a map you can use to move through the underwater city. Simple, but neat, just how I wanted it.

Most of the music for my games comes from open-source directories, and it's no different for Adrift. My choice was "Celestian Aeon Project", a group of very talented electronica musicians who are masters at writing ambient tracks that convey just the right mood. The main title, however, was originally composed by another member of the Lemmasoft Forums named Mihel, and for the intro, I was able to get the help of a professional voice actress known as sake-bento. It all fits together so well that I really think I should have made this a commercial project.

Ah, done is done, and I'm satisfied with the final result. I hope you're too.

Oh... and that secret Karaoke Contest I mentioned last time... if you can find it and contact me about it, I'll have you design an original character in my next VN. That, and maybe give you a free release of my next few commercial titles. Because it's inevitable there will be commercial releases from me. Sometime over 2012.

Big plans, I know. But feasible plans.
Posted by Taleweaver at 10:11 PM 1 comment:

Shoulda been "a few more months"...

...but it is finally done! Grab the multi-platform download at this location!

More about the game... and the secret Hinami Karaoke Contest to follow here!
Posted by Taleweaver at 5:10 PM 2 comments: 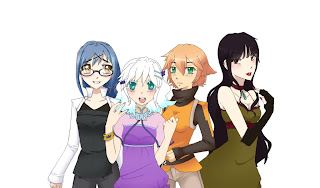 So this is it. This is going to be the homepage of my latest Visual Novel, ADRIFT. And this from me, the guy who sucks at creating homepages. And with a Blogspot account too.

Okay, I really hope I'm up to that challenge...
Posted by Taleweaver at 9:46 PM 2 comments: